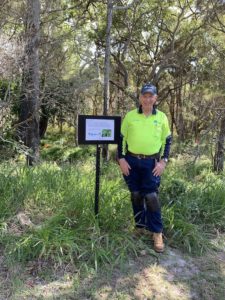 Paul has been busy in Canada writing up the Second Report of the MBBA Asparagus Fern Removal Trial. Paul, Graham and I did inspections of both sites just before Paul want away and made detailed observations on persistence of the weed, new weed growth and new native species growth.

It’s very early days but after collating and analysing the data, here is Paul’s summary of the work to date:

There are starting to be some interesting results with clipping and spraying with Metsulphuron being the most cost effective treatment before crowing, in terms of keeping the Asparagus Fern at bay and allowing for native natural regen.  The next three months should provide more informative data, maybe.  It will then be interesting to see the results after a follow up treatment for all plots, including just clipping.  Perhaps the follow-up spraying should have been done by now, giving the mediocre results from this operation where clipping was not done first.  However, manpower constraints have prevented that so September/October will have to be it, when we also add in the diesel element after clipping.

As I mentioned, the average time spent on clipping versus crowning is 50 versus 84 minutes per 9sq m plot.  The clipping times had quite some variance, from 40 to 70 minutes per plot, and this may be largely due to the use of secateurs versus hedge clippers, with the latter probably faster.  So, the average clipping time could be about half that for crowning.  With a few minutes in for spraying and a marginally better result at 2 to 3 months compared to crowning then this treatment comes out on top for now.

Landcare are very interested in the preliminary results and we will keep you posted as the trial progresses.